The Endocannabinoid System: Everything you need to know 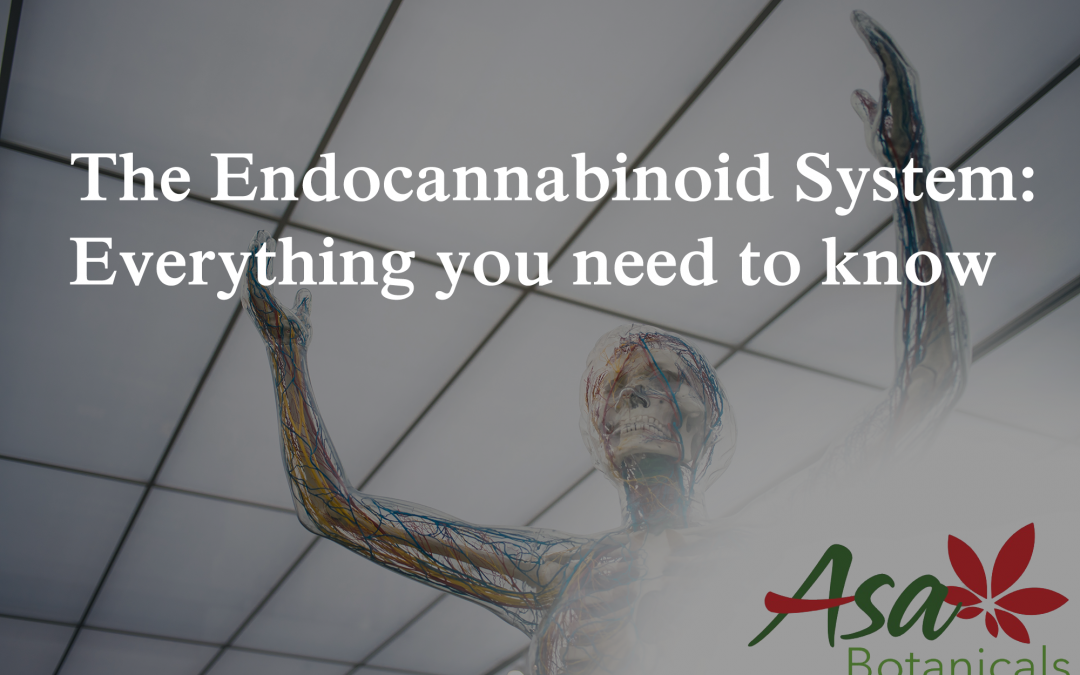 No one is late to the train for learning about cannabinoids, especially with the rising global interest in CBD. In this modern age of medicine, even researchers are still learning how our bodies have been processing the many kinds of cannabinoids, which we have been using for thousands of years.

Since you’re here, you’re likely interested in exactly how our bodies utilize this amazing tool we have at our disposal. How is it that research continuously backs up data showing its promising anxiolytic effects, or even in aiding sleeping patterns? The answer is very complex, but we are beginning to understand the endocannabinoid system, or ECS.

The endocannabinoid system has been labeled as a top target for pharmacotherapy. In a general sense, it is a part of our central nervous system. And what may be a surprise to many, is that it is found across the animal kingdom. Invertebrates and vertebrates harbor an ECS as well. This is why some brands will target their products for pet use because our furry friends can benefit from CBD (just one primary cannabinoid) as well. 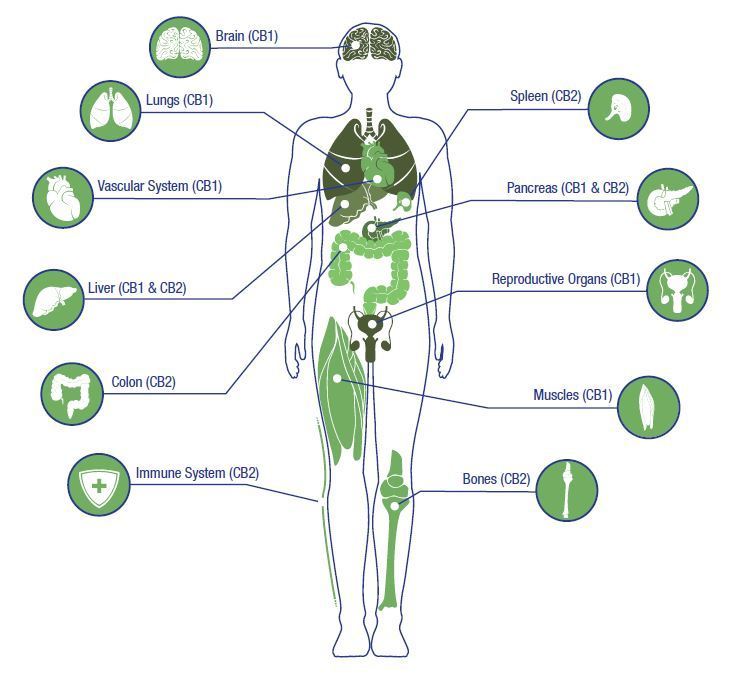 Before we dive into the science behind the ECS, it is important to understand what cannabinoids are, and what they do for our bodies because they have many distinguishing traits.

Products derived from hemp will abide to the .3% law, which requires such products to contain less than .3% THC.

Now, the key difference between cannabinoid THC, or tetrahydrocannabinol, and CBD is the fact that CBD is non-psychoactive. This means that CBD will not get the user “high,” unlike its close counterpart. This does not mean to say that THC has no medicinal benefit. In fact, many of the different cannabinoids have been shown to improve some conditions more than others.

A prime example of this would be the fact that CBD consistently shows its strength in reducing anxiety, while cannabigerol, or CBG, has been shown to aid sleep. The fascinating part of this system is that none of the cannabinoids work as efficiently when isolated, and in fact can have a plethora of benefits with synergism, also known as the entourage effect. Before this gets too complicated, know that we will cover this later. But to put it short, the entourage effect shows that the cannabinoids, when taken in combination with others, have a significant synergistic effect, thus potentially improving the studied benefits.

As mentioned earlier, cannabis is composed of well over one hundred cannabinoids, but the primary cannabinoids have individualistic properties.

So, how exactly does the endocannabinoid system work?

Support for the ECS 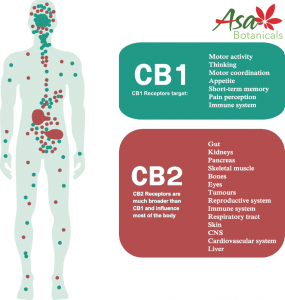 certain cannabinoids, including THC and CBD. The system harbors what is known as CB1 and CB2 receptors, and while a majority of them are found in the brain, there are receptors found in our liver, pancreas, digestive tract, and even bone marrow.

What’s interesting is that this system has not been studied for very long, and was identified in the early 1990s by Raphael Mechoulam as well as researchers Dr. Lumir Hanus and William Devane from the National Institute of Mental Health (NIMH). This team found the first naturally occurring endocannabinoid known as anandamide.

But let’s back up a bit.

In the early 1960s cannabis was first being studied by Yechiel Gaoni and Raphael Mechoulam, who essentially discovered THC as the standing psychoactive property, which they then called the group “cannabinoids.”

They found that THC acts on the brain by connecting to the neuronal signaling system, but this was particularly confusing at the time because THC is a lipid. It was not known how a lipid could 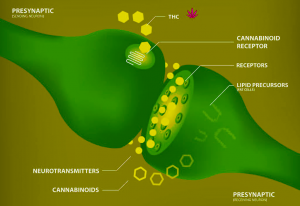 be processed through water-soluble systems that our brains use. Neurotransmitters are water-soluble molecules and can work with peptides and proteins, but not lipids. So, the researchers knew that there had to of been some system that allowed the processing of these newly coined cannabinoids. Each of the neuroreceptors (that transmit things like dopamine, serotonin, etc.) have pockets in which the particular neurotransmitter fits. This then triggers biological functions that can alter blood pressure, sleeping habits, mood and so much more.

The question was exactly how do we process these cannabinoids if they do not fit with our “regular” neural network.

At the time, the best scientific guess was that THC had “membrane fluidizing” properties, but suggested that THC and other related cannabinoids would bind tightly to specific areas of the brain. This implied that THC does in fact bind to some receptors. At this point, it is 1990 and this “membrane fluidizing” hypothesis was in fact confirmed with the isolation and cloning of the first cannabinoid receptor, known as CB1. And later CB2 was found.

As mentioned earlier, most of these receptors are found in the brain. This is especially true for CB1 receptors CB2 receptors are primarily found outside the brain. The next part is essential in understanding how cannabinoids, and more importantly the CB receptors, influence our central nervous system.

Firstly, CB1 and CB2 receptors are not “normal” transmitters in the fact that they are also lipids. However, the receptors are surrounded by water-soluble neurons, which would normally mean that communication between the two is impossible. On top of that, cannabinoids move in the opposite flow of synaptic signaling (the pockets mentioned before).

For example, a neuron that releases, say, glutamate is called a “pre-synaptic.” The target neuron that expresses these receptors are called “postsynaptic,” a direct communication.

Endocannabinoids move in the opposite direction. They are synthesized from the postsynaptic cells and move back across the synapse (pocket) in which they then interact with CB1 receptors. They are located on adjacent nerve terminals in precise synaptic regions, and can inhibit the release of many excitatory and inhibitory neurotransmitters. This means that endocannabinoids literally have the ability to monitor and regulate many of our neurotransmitters, such as dopamine.

As you can imagine, this is an exciting aspect for pharmacologists and researchers alike. However, there is still one misunderstood problem, and that is directing the location of these cannabinoids. Because of the dispersion of these CB1 and CB2 receptors, it is still greatly complicated on how we can target specific areas for therapy.

How does THC work with the ECS?

THC is particularly interesting as it works with both CB1 and CB2 receptors, and is this is believed to be the reason it can feel powerful in the body.

THC can help stimulate appetite and reduce pain, but can also cause paranoia and anxiety in some. The reasons behind this actually still not quite understood. We believe that people who are more prone to anxiety under the use of THC have different neurotransmitter levels, and first-time use can cause an array of problems.

How does CBD work with the ECS?

Researchers now know that CBD does not interact with our ECS the same way that THC does. In fact, this is consistent throughout the many other cannabinoids as well.

CBD has been shown to prevent endocannabinoids from being broken down, but also involved in suppressing certain synaptic transmissions.

As we mentioned earlier, it is understood that some cannabinoids simply do not operate with full efficiency when isolated. The preferred medical approach would be to utilize the full system, and not just one part of it.

It is known as the entourage effect. Discovered in 1999, it was a novel theory as to why certain extracts have lower effects in some situations when compared to others. And proposes that one molecule is highly unlikely to match the therapeutic potential when compared to the synergistic effect the combination of cannabinoids have.

A meta analysis conducted by the NCBI on this very effect found strong evidence to the fact that the endocannabinoid system serves as an ensemble. “The preceding body of information supports the concept that selective breeding of cannabis chemotypes rich in ameliorative phytocannabinoid and terpenoid content offer complementary pharmacological activities that may strengthen and broaden clinical applications and improve the therapeutic index of cannabis extracts containing THC, or other base phytocannabinoids. Psychopharmacological and dermatological indications show the greatest promise.”

The meta analysis covered studies administered on Alzheimer’s patients who were agitated and the time of testing, and with varying controls on dosages and compositions. Furthermore, studies were reviewed under the influence of cannabinoids on people with insomnia and found improvements across the board.

The entourage is not proven, however. The theory stands as a guide for pharmacology and administering for certain studies. However, it is known that specific cannabinoids can carry out specific functions, which is grounds for future evidence.

Brands that sell and promote “Full Spectrum” CBD are ones that are comprised of many cannabinoids, and not just an isolated form. The hope is to give the blend of benefits that studies have shown to give.

Terpenes and the ECS

The entourage effect is supported to a degree in which terpenes can affect the strength of the dosage. Terpenes are chemicals that give cannabis its physical properties (and smell) and was believed to be irrelevant to the potential health benefits.

We now know that it’s more complicated than that. 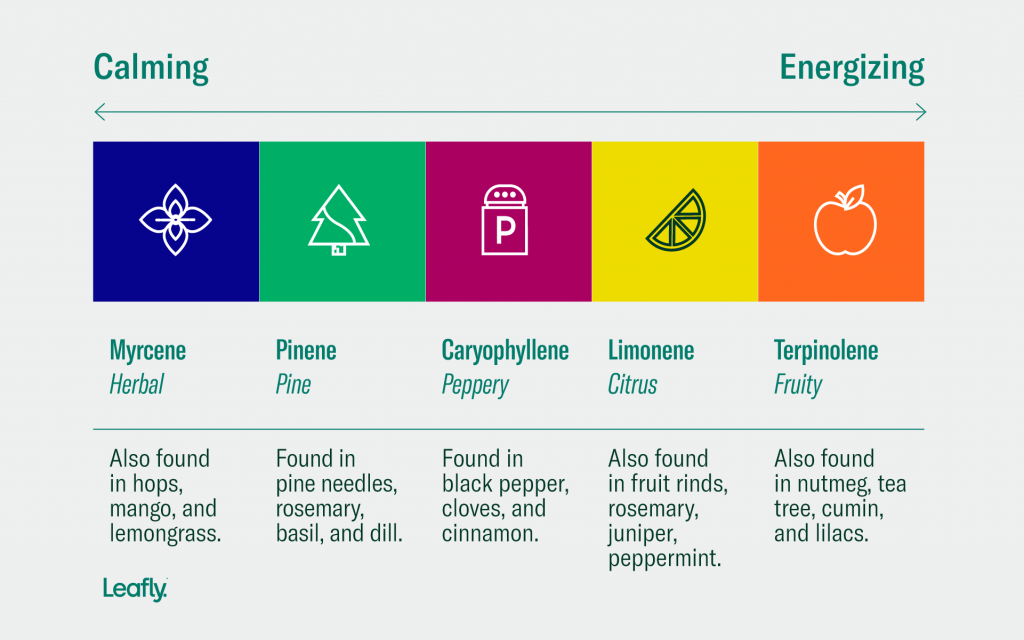 Dr. Ethan Russo, a neurologist, studies the relationship between these two extensively. In his study “Taming THC: potential cannabis synergy and phytocannabinoid-terpenoid entourage effects,” he covers the vast impact that each composition has on the individual mechanisms.

Without a doubt, there is a need for more research. The entourage effect isn’t understood completely, especially when there is still some misunderstandings on our ECS.

The endocannabinoid system is a complex one. It’s only been studied for a couple of decades now, but the knowledge we have for it supports the fact that we have an inherent system to utilize certain cannabinoids. Certainly, more research is being done on the exact effect, but support is obviously growing.

It is important to understand that many of the studies are clinical trials and require time and extensive evaluation for a full understanding. If you are thinking about trying CBD for an ailment, consider talking to your doctor first. Especially if you are on other medications, as CBD has been shown to affect them.

If you are eager to try CBD, consider learning more on our Learn page. All of our products are processed from Industrial hemp, which contains less than 0.3% of the THC compound. Having practically zero traces of THC by volume, all hemp products are legal to buy, sell, and ship due to its inability to create any mind-altering psychoactive effects.

*Disclaimer* We are not claiming that CBD will cure any of the ailments listed above. The purpose of this article is to inform, not to give medical advice. While also giving a lab certified place to purchase CBD products. Consult your doctor before trying CBD if you have any medications, as CBD may interact with them.*