How CBD Can Treat Eczema (And Psoriasis) 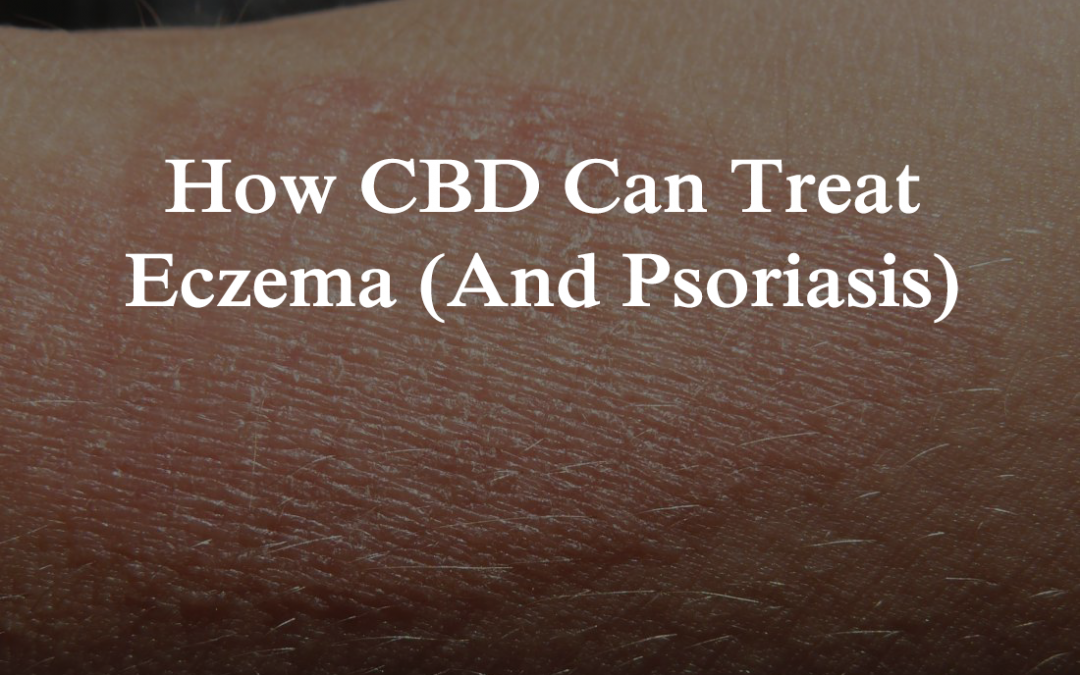 If you’re already familiar with eczema and have certainly had your fair share of patches, then chances are you have heard or even tried CBD for your condition. In fact, we’re seeing more and more topical ointments that contain hemp oil, and that’s because of the rising support of research that backs it up. Read more to learn how CBD can treat eczema and even psoriasis! We have a lot of customers that use CBD for eczema and psoriasis and it has done wonders for them

Eczema has no known cure, so is there really any potential for CBD to be a possible treatment? Research suggests that CBD and other cannabinoids have qualities that can help with inflammation and itchiness.

Atopic dermatitis (AD), or eczema, is a very common skin condition in which patches of skin become red and itchy. And while it largely affects children, it can occur during any age and is also a chronic condition. However, there is not just one form of eczema. The varying forms differ with the area of the body that’s affected, and different forms of rashes. While each of the forms has distinct conditions, causes, and triggers, all forms share the same problem, and that is inflammation.

Signs of having eczema is dry, irritated skin that comes and goes with outbreaks. These can be triggered through weather and the environment, but also can be influenced by stress. Skin can start to crack, which can result in raised bumps, scaly skin, and of course more itchiness.

According to Mayo Clinic, eczema typically starts before the age of 5, but persists. Some people with eczema can get episodes very often, while others can have episodes rarely.

But what causes eczema? Unfortunately, there is no clear answer. But researchers believe that it is a combination of genes as well as trigger elements, such as bathing. The community has also taken note that the itchiness is often at its highest point of severity during the night time, which can cause sleeping problems.

People with eczema have an over-reactive immune system. This means that their skin reacts heavily towards outside elements, but also substances inside the body. Inflammation is the immune system response, and irritation is the result.

One last possible cause that researchers are interested in is the protein called “filaggrin.” This protein helps our skin maintain its protective barrier on top of the skin. Studies show that the gene responsible for producing this protein is mutated for those with eczema. The lack of this protective layer is a reason people with eczema are more prone to skin infections.

The first approach to treating eczema is understanding your triggers. However, some critical triggers cannot be controlled, such as weather or dry air. Some triggers that can be controlled is bathing habits, such as using lukewarm water (opposed to hot) and using less invasive cleaning products, or even controlling stress. And of course, preventing itching can help immensely. This can be a little bit easier if you lessen contact with harmful materials or detergents, and using soft, breathable clothing.

Typically, prescriptions are given for severe forms of eczema, or if the itching is disrupting sleep too much. Over-the-counter products designed for eczema aim to moisturize the skin, which can help with itchy rashes. The problem with these OTC drugs is that you can develop a resistance to them pretty easily. So, they’re best to be used only when necessary.

When practices of moisturizing after bathing, controlling stress, etc., prescriptions can be given. Steroids, TCI’s and skin barrier creams all work by giving your skin the nutrients and protection it needs. Another common prescription is calcineurin inhibitors, such as Protopic. These affect your immune system, and do have a warning about the potential risk of cancer. However, this risk has been widely discredited for not having enough support to support the warning.

Treatment is less available for infants with eczema. Best treatments will be decided by a doctor, but the best first approach is to identify harmful materials affecting your baby.

Unfortunately, even if you do all of the right things, and work your best at changing your routines, you can still have extremely itchy flares. Eczema is quite unpredictable.

As mentioned before, the age with the highest rates is the first 5 years of life. Over 70% of cases start in that age group, while 60% of infants with eczema continue to show symptoms in adulthood.

Statistics tell us that nearly 32 million people in the U.S. have some form of eczema (there are many forms.) That means 1 in 10 people develop eczema in their lifetime, with the highest prevalence being in childhood. An estimated 16.5 million U.S. adults have eczema that initially began ~2 years of age, with nearly 40% being moderate to severe. It is simply not true that eczema is a childhood condition.

And worldwide? Prevalence is surprising. Rates vary from country to country, according to the biggest epidemiologic survey. The highest rates in adulthood are in China, while South Korea has the highest rates in both children and adolescents.

Itchiness is the most impactful burden for eczema. A recent study found that 70.5% of adults with moderate to severe eczema reported unbearable itchiness within the past 2 weeks. 85.8% of which reported a daily itch.

Sleep isn’t an easy task for those with eczema. Irritation and pain can keep one up, and also disturb sleep cycles. Disturbance occurs in 60% of children, while 30% of adults experience insomnia, drowsiness, and fatigue.

Skin pain is another aspect that is highly reported as the most burdensome symptoms. 61% of adults report pain, and 33% report pain at least once per week.

Autoimmune and cardiac diseases are at higher rates for people with eczema. This also includes diabetes, obesity, and high blood pressure. Health is often “unsatisfactory” for people with eczema, and researchers believe that there is indeed a higher risk for infections, and other debilitating conditions, especially asthma.

Studies also express the alarming mental implications there are for children and adults with eczema. Children with eczema are 2 to 6 times more likely to have depression, anxiety, or a conduct disorder. For adults, the risk of attempting suicide increases by 36%.

One of the many cannabinoids found in cannabis (hemp/marijuana) is known as cannabidiol, or CBD. The reason this cannabinoid takes the highlight over some of the others is the fact that it has multipurpose.

Studies express its anxiolytic, anticonvulsant, and anti-inflammatory properties. However, much of the focus research for CBD is for the medical effects it has for people with epilepsy. Even though that is a large focus of research, much more of the research is done on sleep aid and inflammation.

CBD is processed in our endocannabinoid system (ENS), a part of our central nervous system that is found in every animal and the sole purpose is to metabolize and process cannabinoids. CBD differs from THC in the fact that it is non-psychoactive, and serves many of the medicinal benefits with cannabis. The ENS is a system of receptors known as CB1 and CB2, which are found in the brain, but also the liver, pancreas, and even digestive tract. So, when CBD is consumed, it is processed through our nervous system and is believed to assist in chemical imbalances and other restorative properties that influence things like Parkinson’s or Alzheimer’s.

For eczema, the focus will be the result of the immune system overreacting to elements and causing skin inflammation. Of which, is another focus of study for CBD. Aside from arthritis, CBD can be a topical component to help with irritation. A study in 2014 found that CBD exerted complex anti-inflammatory actions by repairing certain proteins in the body. “Collectively, our findings suggest that, due to the combined lipostatic, antiproliferative, and anti-inflammatory effects, CBD has potential as a promising therapeutic agent for the treatment of acne vulgaris.”

Another study wanted to see if CBD could contribute to melanogenesis and actually found that CBD increased both melanin content and tyrosinase activity, which also produces melanin. The study also found that CBD increased protein levels across the board. With MITF, TRP1, and TRP2, which are all essential in the protective barrier on the outermost part of the skin.

A study conducted on mice found that there is a lot of potential in helping with allergic contact dermatitis. By using mice that lacked both of the known cannabinoid receptors, they were able to study the effects on mice with the receptors. They found that the mice with increased levels of endocannabinoids displayed a reduced allergic reaction in the skin. This suggests that there is a protective role when it comes to contact allergies in the skin.

Another study that utilized clinical questionnaires supported the fact that topic administration of CBD ointment (without THC) was a non-invasive treatment. Quality of life improved in patients with skin disorders in general, but particularly with an inflammatory background.

Lastly, a review of recent literature posted on the National Collection for Biotechnology Information (NCBI) did find that much of the research, given that it is preclinical, suggests that cannabinoids serve a role in many skin conditions, including acne, allergic contact dermatitis (and many other forms of eczema), sarcoma, skin cancer, and psoriasis.

Much of the research for CBD and skin conditions are supportive of the fact that the ENS harbors many restorative qualities. CBD and other cannabinoids require more clinical testing before the FDA and other medicinal agencies can call for CBD to be the main treatment for these skin conditions. At the same time, for something as severe as itchiness brought on by inflammation, then perhaps CBD deserves to be explored more.

Also, consider your diet. Vitamin D and Vitamin C have been shown to improve similar skin conditions. More specifically, vitamin C is an antihistamine, which can prevent some of the symptoms. People with eczema are often vitamin D deficient, even though vitamin D helps reduce inflammation.

Research consistently sides with the possible benefits it has on the restorative qualities, but also the alleviation of skin irritation, which is highly voted as the number one most burdensome symptom of eczema. If you have eczema and are considering to use it for your itchiness, consider reading the science behind CBD and psoriasis, as much of the research there also proposes benefits brought on by CBD. Also, consult your physician first because CBD and other cannabinoids have been shown to affect other medications if you have them. The scope of this article was to inform, but we also provide a safe place for purchasing CBD that abides by federal regulations in our Shop. All of our products are full-spectrum and contain less than 0.3% THC