CBD for Insomnia: What We Know 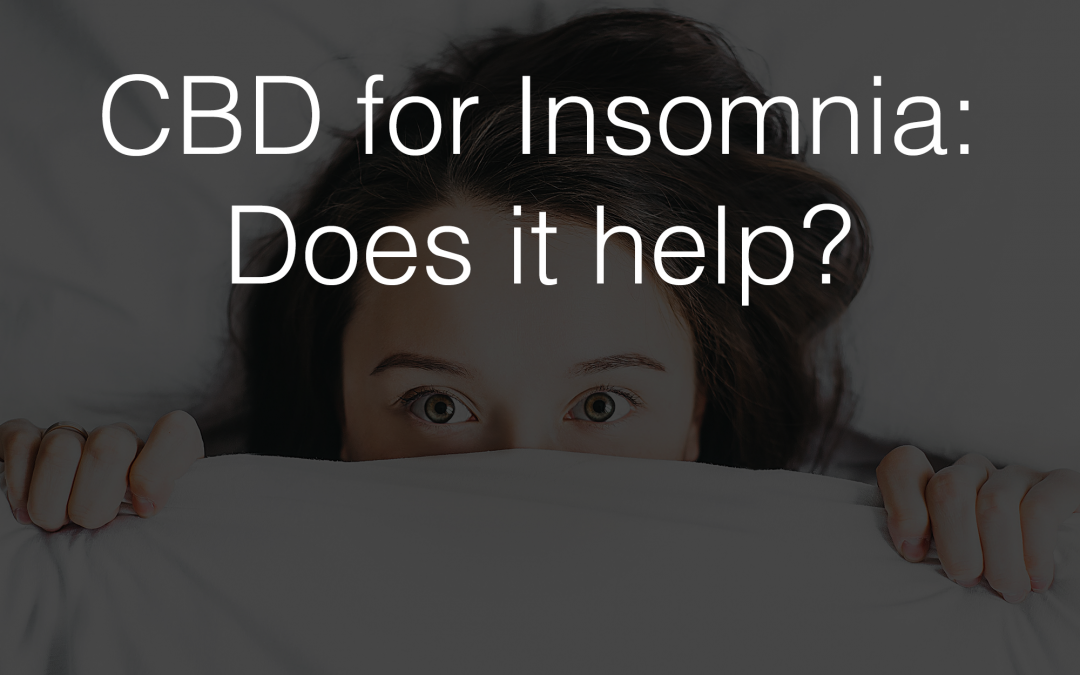 CBD for Insomnia: What We Know

Sleep is a critical aspect for health, growth, and of course our sanity. It’s time our bodies use to recuperate. We reinforce memories and heal from stresses that our body has on a daily basis when we sleep. So, it goes without saying that, if we have unhealthy sleep, we will suffer for it.

Research for sleep health has significantly picked up its pace. Organizations like the Centers for Disease Control and Prevention, Sleep Research Society, National Institutes of Health, and the Mayo Clinic have highlighted the crucial element of sleep. Now, it’s regarded as the “third pillar” of health.

Statistics show that America is sleeping less and less. The average sleep we get is at 6.8 hours, which is over an hour less when compared to 1942. 59% of americans get 7 or more hours of sleep, while 40% get less than 7 hours, according to a Gallup poll.

Yet, 67% of people who get 6 hours or less are positive in the fact that they would feel better with more sleep. And 45% say the same for those who get ~7 hours. The same poll shows that 86% of people who get 8 hours of sleep are satisfied.

Adults under the age of 50 are the most likely to feel sleep-deprived, and even then, the elderly sleep much more. Over 50% of adults ages 18-29 are sleep deprived, and the same for ages 30-49.

According to the CDC, there are numerous health risks associated with long periods of sleep deprivation. A significant increase in risk factors for heart disease, heart attacks, cancer, arthritis, and depression.

The National Sleep Foundation states that insomnia affects 30% of the general population, while 10% have chronic insomnia. 83% of people with depression also experience symptoms of insomnia. One statistic shows that 1 in 4 Americans develop insomnia each year.

Sleeplessness is an epidemic, and insomnia is the consequence. A prolonged period of sleep deprivation can increase the risk of developing insomnia, and at this point, the U.S. is not sleeping enough.

Within our educational systems, sleep problems rank the #1 issue for adolescents in schools. Young adults and children under the age of 18 require much more sleep when compared to older adults. The reason being growth and puberty, yet the schedules simply don’t work together, as this age group needs 9 hours of sleep. This habitual lack of sleep increases the risk for developing insomnia, according to the National Center for Biotechnology Information (NCBI.)

Even a decade ago, the limited research we had on sleep essentially thought that sleep deprivation only caused daytime sleepiness. We now know that prolonged sleep deprivation can cause some serious medical issues.

One 13 year study on the relationship between sleep deprivation and obesity looked at nearly 500 adults. By age 27, those with short sleep duration (less than 6 hours) were 7.5x more likely to have a higher body mass index, after looking at family history, levels of physical activity, etc.

Glucose tolerance, which is a precursor for diabetes, occurs more for those who get 5 hours of sleep (or less) when compared to those who get 7-8 hours, says one study. However, this was a “community-based cohort,” and ultimately concluded that the diabetes risk factor was independent from obesity.

According to many epidemiological studies, sleep loss is associated with heart attacks and perhaps even strokes. According to one of the studies, ten years after taking a baseline test (for the risk of heart complications), there was a 45% increased risk for those with 5 hours or less, as well with oversleeping. This was even taken into account after considering smoking, diet and BMI. This is possibly because of the changes in blood pressure that lack of sleep brings, as well as sympathetic hyperactivity (increased heart rate, increased respiration, increased blood pressure, diaphoresis) and glucose tolerance.

Sleep loss is frequently crossed with its adverse effects on mood behavior. According to a meta analysis, adults with chronic sleep loss report an excess of mental distress, ranging from anxiety or depressive symptoms. It even suggests that this prolonged loss of sleep impacts mental health more than it does to our cognitive/motor functions.

Financially, insomnia costs the U.S. economy roughly $63 billion annually in the workforce alone. If we take into account for the possible adverse health effects it can bring, it’s well over $400 billion a year.

Before we look at what CBD can do for insomnia, it’s important to look at the traditional treatment methods, starting with mental improvement.

Stress, depression, and anxiety are the leading factors that cause chronic insomnia, all of which require a lot more than just medication. Common first steps are to deal with these causes of insomnia, which can help restore sleep patterns for many people.

This means people turn to cognitive behavioral therapy (CBT), which aims to work on these stresses through many different, complex methods.

Now, there is a time for these medications, and your physician will know when it’s appropriate, especially for those who are suffering from chronic insomnia. CBT may prove helpful to many, if not everyone, but is not a guaranteed cure for insomnia.

CBD, or cannabidiol, is one of the many components found inside the cannabis plant (hemp/marijuana). It is non-psychoactive, and will not cause a “high.” The reason CBD is standing out in the medical field is for its anxiolytic and anti-inflammatory properties, but is being studied for many more things such as diabetes and of course insomnia. While CBD can be extracted from marijuana, its federal legal boundary is to be extracted from hemp, as this will have such a trace amount of THC.

Cannabis has many different cannabinoids in it, which all serve their own purpose, but CBD stands out for aiding sleep patterns as well as anxiety. How is this possible?

Animals across the planet (yes, even our dogs and cats) have what is known as the endocannabinoid system, or ENS. This is a newly discovered part of our central nervous system, and is directly responsible for the processing of the many cannabinoids. The ENS harbors what is known as CB1 and CB2 receptors, and while this gets fascinatingly more complicated, the scope of this article will keep it simple. If you’d like to learn more about the processing of cannabinoids in our body, visit the NCBI, as they have a vast collection of new research for it.

These CB1 and CB2 receptors are found in higher concentrations in the brain, but as well as our liver, digestive tract, and even in our bone marrow. When one takes CBD, or any other cannabinoid, these receptors latch on to them. And the process it undergoes is very important in how we understand the medical use of cannabis. These connections of cannabinoids have been shown to help monitor certain neurotransmitters, and can help regulate our dopamine and serotonin levels, says this meta analysis. But also has been shown to help regulate blood pressure, and even blood sugar. This is why researchers have been looking at how CBD can help prevent diabetic neuropathy.

Firstly, it’s important to understand how our brains operate during sleep. Patterns and what changes in the brain when we have insomnia. When we sleep, our brain goes through complicated processes that are carried out through our neurotransmitters. This is what we know as dopamine, serotonin, etc. These strongly influence our sleep duration, and quality says the American Psychology Association as well as NCBI.

Some of the main neurotransmitters responsible for our sleep quality are gamma-aminobutyric acid (GABA), serotonin, dopamine, histamine, glutamate, epinephrine, and norepinephrine. The part of the brain most responsible for regulating sleep duration is the hypothalamus. Certain neurons produce the aforementioned neurotransmitters, but with a heavy focus on GABA. It is currently known that GABA (as well as dopamine and serotonin) neurons inhibit the firing of cells involved in wakefulness. This aspect of sleep research is actually pretty well understood. We know that those suffering from insomnia simply have an imbalance with these neurotransmitters, and this causes major problems in our sleeping patterns.

As mentioned before, much of the research behind CBD is how it works with our central nervous system. And amazingly, research is finding that CBD and many of the other cannabinoids are able to help monitor and regulate these chemical imbalances.

According to an analysis published in 2014 that covered much of the clinical data for CB1 and CB2 processes, the primary way that CBD has been shown to help insomnia (sleep patterns) was its anxiolytic properties and its regulatory properties.

Another study took representations of anxiety/sleep scores and found a statistically significant decrease in anxiety levels (more so than sleep, but both showed improvement.) It took a recording of controlled doses of CBD for those suffering from these problems, and results were taken after just one month. The results found that 80% (57/72) patients experienced improvement in their sleep, and over half continued using CBD 3 months after testing.

We’ve covered what the science says about CBD and anxiety, which also shows significant promise as to how CBD helps our mood and sleeping patterns. There is an obvious link between anxiety and insomnia, both of which have been shown to improve under the effects of CBD.

There are countless research and clinical trials for the effects CBD has on sleep patterns. Researchers are more and more confident in the fact that it could be used as a primary combatant for the sleep epidemic…

It’s important to understand that the clinical trials done on insomnia are utilizing a controlled dose. Research has found that a higher concentration of CBD is needed in order to correct sleep patterns, as too little will not achieve this effect, and too much can cause daytime drowsiness. Having said that, researchers are more and more confident in the fact that CBD does have strong anxiolytic properties.

If you are wanting to try CBD for your sleep health, then consider talking to your physician about it first. CBD does interact with other medications, and your physician will know if it’s the right move for you.

If you are eager to try CBD for your sleep health right away, then consider shopping here! All of our products are processed from Industrial hemp, which contains less than 0.3% of the THC compound. Having practically zero traces of THC by volume, all hemp products are legal to buy, sell, and ship due to its inability to create any mind-altering psychoactive effects.

*Disclaimer* We are not claiming that CBD will cure any of the ailments listed above. The purpose of this article is to inform, not to give medical advice. While also giving a lab certified place to purchase CBD products. Consult your doctor before trying CBD if you have any medications, as CBD may interact with them.*